The remarkable ability of dogs to seemingly sniff out medical conditions has developed, expanded, and garnered criticism over the last several decades. In 1992, popular magazine Dog World brought attention to epilepsy detection in dogs. As of now, there is limited scientific evidence that seizure alert dogs are effective, but the field remains one of considerable interest. In 2019, researchers confirmed the presence of an olfactory profile associated with epileptic seizures. Anecdotal evidence abounds of dogs able to reliably detect flucuations in blood sugar associated with diabetes mellitus, but these claims have not stood up to the rigor of scientific investigation, with one study finding only about ~36% sensitivity. Cancer detection among dogs has faced the same fate, with limited evidence drawing some substantial criticism. Studies have found that there appears to be a detectable compound in the breath of lung and breast cancer patients, as well as in the breath and urine of bladder cancer patients. Nonetheless, there are many anecdotal reports of  behaviors changes in pets that prompted owners to seek medical care, subsequently finding cancer. Perhaps most recently explored is the space for canines in scent detection of infectious disease. Thus we find ourselves in 2020-- with dogs being trained to detect infection with the pathogen currently sweeping the globe, SARS-COV-2.

News reports as early as April discussed intention to train dogs for this purpose, particularly in light of resource shortage and few rapid-detection tests available. Penn Vet launched a pilot program. Multiple proof-of-concept studies followed. A pre-print published in June found success rate varying from 83-100% among 8 dogs and over 300 trials. A late-July publication reported 82% sensitivity (the ability to accurately identify true positives) and 96% specificity (the ability to accurately reject true negatives), with an overall detection rate of 94%. The latest pre-print, posted September 9th, further confirmed promise for this detection method, with 86% sensitivity and 93% specificity. As of late September, these results have culminated in real-world application. Helsinki's airport is now using COVID-detection dogs as part of a volutary screening program. The entire process takes less than a few minutes, and those that test positive per the dogs are then offered a free medical test.

Could this be the future of disease detection? It certainly isn't perfect. The dogs do still need to be trained for detection, as well as trained for use in a public setting. As of now, the dogs aren't alerting to passerby-- a sample must be collected on a wipe and then isolated for the dog to smell independently alongside negative samples. However, if rapid detection tests remain scarce as we move forward, dogs may become a key player in the fight to get this pandemic under control. What are your thoughts? 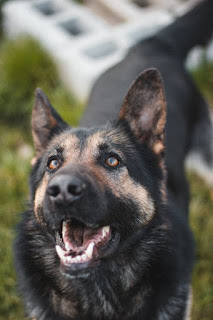 at September 27, 2020
Email ThisBlogThis!Share to TwitterShare to FacebookShare to Pinterest
Labels: news, One Health