Anyone that has ever owned an unruly dog knows the importance of training to behavioral management. In fact, behavior concerns are one of the number one reasons that both dogs and cats are surrendered to shelters or rehomed. There are many ways to train a dog, and much as in the realms of religion, politics, and parenting, every pet owner and professional will have methods that they insist are the right way. This has more recently become a topic of contention in animal welfare circles. Positive reinforcement training (explained further below) has become increasingly popular among veterinary professionals and in zoo settings. The 'Fear Free' movement, founded in 2016 by veterinarian Dr. Marty Becker, has blossomed into a community of pet professionals dedicated to reducing fear, stress, and anxiety in all walks of companion animal interactions. Despite the popularity of 'R+' strategies in animal professional circles, trainers using aversive methods have persisted, and these methods are often hotly defended by users. Evidence-based recommendations have also been hard to come by-- a 2017 literature review found that the current available body of evidence does not strongly support that negative outcomes are associated with aversive methods. However, a new study, published December 2020 in PLOS One, provides "the first empirical study to systematically investigate the effects of different training methods on the welfare of companion dogs within and outside the training context."
Before circling back to the findings of the new study, a brief review of operant conditioning is in order. Training methods can be divided into quadrants based on what is done and why it is done. Positive and negative refer to whether a stimulus is given or taken away. Reinforcement and punishment refer to whether the intent is to increase a behavior or decrease a behavior, respectively. These combinations create the following descriptions:

The study in question sought to answer the question of whether or not aversive training methods (positive punishment and negative reinforcement) negatively impact the welfare of dogs. The answer they arrived at is yes, that these methods induce stress and impact canine mindset even outside of a training setting. This study is open access and can be read online for free. Here are the highlights:
Methods & Sample:
Results:
The authors conclude:

In other words, aversive methods negatively impact the psychological state of dogs, and therefore their welfare. This further supports previous studies that have suggested as much.

Find a Fear Free Professional Near You 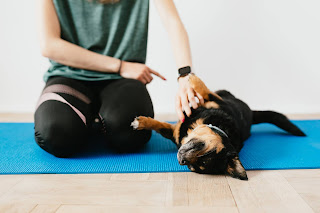