Why Are (Some) Grapes Toxic For (Some) Dogs?

As an emergency veterinary nurse, I saw many dogs presented for toxin exposure. Rat bait, prescription medications, NSAIDs, chocolate ... grapes? While many pet owners are still surprised to find out grapes are toxic, veterinarians have been suspect of the fruit as early as 1998, when an association was noted between otherwise unexplained kidney failure and recent consumption of grapes or raisins. These concerns were popularized in a 2001 JAVMA Letter to the Editor, and several studies followed to try and discern the mechanism underlying this association. Curiously, only some dogs experienced the kidney injury, and not always the first time they ate grapes. It was also never clear what amount of grapes was toxic, as it seemed to vary considerably between case reports. For over two decades, answers eluded researchers, prompting poison control centers to treat any exposure to any amount of grapes as a medical emergency, and leading veterinarians to urge pet owners to never allow their dog to consume grapes. These recommendations haven't changed, but as of March 2021, the cause of toxicosis may have finally been revealed.

In the April 1, 2021 issue of JAVMA, a new Letter to the Editor is titled "Unique sensitivity of dogs to tartaric acid and implications for toxicity of grapes," authored by four veterinarians, Drs. Wegenast and Meadows with the ASPCA Animal Poison Control Center, Dr. Anderson at South Shore Veterinary Hospital, and Dr. Southard at Cornell's Veterinary University. The authors note that "Cream of Tartar" (also known as potassium bitartrate, a compound related to tartaric acid) induced severe illness in dogs with pathologic findings similar to those that had been associated with grape ingestion. The authors propose that tartaric acid and potassium bitartrate are the toxic principles in grapes, with the following observations:

While this letter only represents the observations of professionals, and is not a study on the subject, it provides the first insight into a very plausible explanation for this toxicity, and opens the door for future investigation. While it may be a pipe dream, perhaps one day a calculator could estimate the toxicity of a given amount of grape based on the type, allowing veterinarians to better triage these patients and avoid "over-treatment" (which is not typically harmful for the dog, but can hurt the pocket book!) 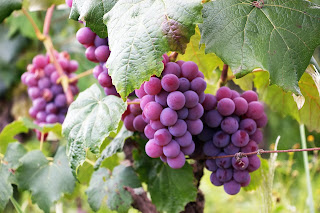 at March 30, 2021
Email ThisBlogThis!Share to TwitterShare to FacebookShare to Pinterest
Labels: news, nutrition